March Madness and the Dow 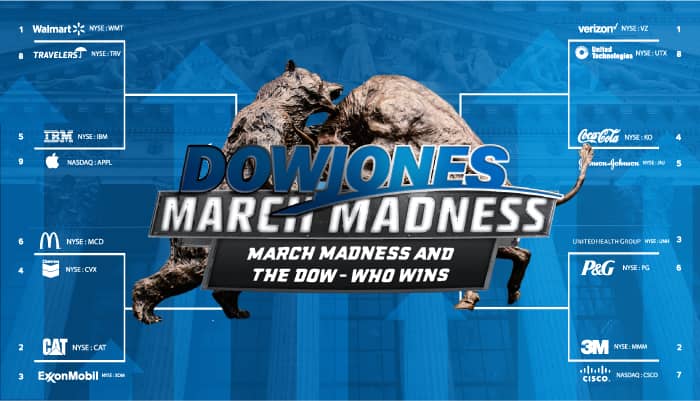 March Madness and the Dow – Who Wins?

And can we see patterns from one year to the next?

The Dow Jones Industrial Average (“the Dow”) is a stock market index, used to assess movements in the market and its overall strength or weakness. It was created in 1896 by Wall Street Journal editor and co-founder of Dow Jones & Company, Charles Dow.

The Dow tracks the market performance of 30 large, American companies. Initially, the Dow had only 12 stocks and these included such golden oldies as American Cotton Oil Company, U.S. Leather Company, and Distilling & Cattle Feeding Company. In 1920, the Dow expanded to 20 stocks and then to 30 stocks in 1929.

Some people think it’s a good idea to buy last year’s best Dow performers, figuring that they will continue to perform well and reward investors. Others prefer to buy last year’s worst Dow performers, thinking that their fortunes will magically reverse. So, we decided to play our own version of March Madness and rank all the companies in the Dow based on 2016 performance and then pit them against one another. So, using performance from 2016, here’s what we found:

The Dow had a very good 2016, closing up about 13%, which was excellent given how the year started.

The best of the 30 stocks, however, climbed by more than 2 ½ times that, with Caterpillar and UnitedHealth Group both returning more than 36%! And of the 30 Dow stocks, 27 of them went up.

The losers of the Dow 2016 Madness were:

See any patterns from 2015 to 2016? Because I don’t (other than Nike and Chevron saw some big swings from one year to the next).

But here is what I do know: every large, powerful company has good and bad years. And trying to determine future performance based solely on past performance is a bad idea.

So, who will the best performer for the rest of 2017? It’s anyone’s guess. Hence, the Madness.

And the reason mutual funds are so popular.

Distributed by Financial Media Exchange. Material in this publication is original or from published sources, and it is believed to be accurate. However, we do not guarantee the accuracy or timeliness of such information and assume no liability for any resulting damages. All expressions of opinion reflect the author’s judgment at the date of publication and are subject to change without notice in reaction to changing market conditions. The views expressed are those of the author and do not necessarily reflect those of Midwest Capital Advisors, LLC. This material is provided for general informational purposes only, and it is not to be construed as investment or financial advice or an offer, solicitation, recommendation or endorsement of any particular security, product or service. Readers are cautioned to consult their own tax and investment professionals with regard to their specific situations.

Are you interested in receiving occasional updates that offer wealth management and financial planning insights? MCA will not share your information.